For the second year in a row, the Port of Portland handled the third most tonnage on record as 2011 totals improved upon results for 2010. Tonnage represents the total volume of all cargo that travels through the Port. The year-end report shows a two percent increase, with approximately 13.4 million tons handled.

Growth was driven primarily by container volumes, which improved by 9 percent to nearly 200,000 TEU (twenty foot equivalent units). February 2011 marked the beginning of a 25-year lease of the Port’s container terminal to ICTSI Oregon, Inc., and over the course of the year full import containers improved by 5 percent. Full export containers grew by 27 percent, representing a jump in demand for regional products heading to overseas buyers.

Aside from containers, most other cargo categories stayed flat or showed minor decreases. Grain remained essentially unchanged at 4.7 million tons. Mineral bulks – primarily potash used in fertilizer, and soda ash used in glass production – dropped by half of a percent, to 5.2 million tons. Breakbulk, which is typically steel slab and steel rail, dipped 2.6 percent, with 941,120 tons. The Port also handled the first shipments of logs for export since 1997.

Auto imports lagged due to effects of the earthquakes and tsunami in Japan, and more recently flooding in Thailand. Disruptions to parts suppliers caused domino effects throughout the supply chain at factories, ports and dealerships. The 234,048 vehicles handled by Portland in 2011 represented an 11.5 percent decrease. Just recently, the Port began exporting Ford vehicles to South Korea for the first time.

Subaru of America, Inc. completed construction on its new, 413,000-square-foot facility housing auto parts distribution, a service training center and regional offices in the Port’s Rivergate Industrial District. This adds a new strategic customer in close proximity to the marine terminals that is utilizing Terminal 6 for containerized imports.

The Port’s Troutdale Reynolds Industrial Park received the Phoenix Award for the top brownfield redevelopment project in the nation. The once-idled property is being restored to productive use, and it is already home to FedEx Ground’s 441,000-square-foot regional distribution hub. The Port recently initiated the second phase of development at the park, which will bring nine new lots to market on 180 acres starting in 2015.

In nearby Gresham, Port commissioners voted to acquire 222 acres from LSI Semiconductor, which will be known as Gresham Vista Business Park. It is the only such site in the region consisting of more than 100 acres that sits zoned and ready for development. A regional industrial lands inventory is underway to identify more large industrial sites and assess their readiness to support new private-sector jobs. 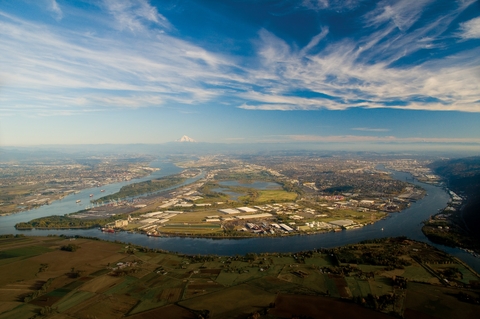