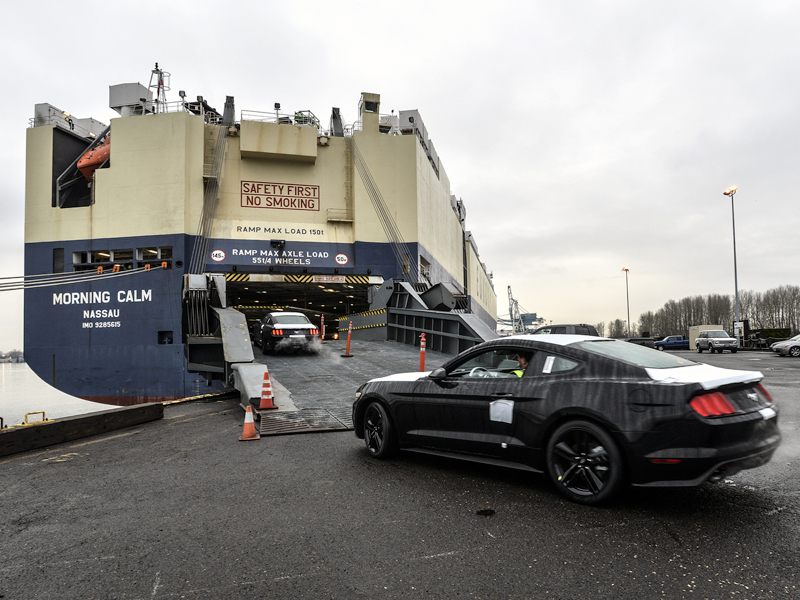 Back in 1953, when the Port of Portland first started handling autos, each car was loaded off of the ships – one by one – using a crane. These days, vehicles are driven off and on the ships, which resemble giant floating parking garages. It is much more efficient and with a very low incidence of damage or injuries.

That’s not the only thing that has changed.

Just a few short years ago, the Port was the second largest auto import gateway on the U.S. West Coast and fifth largest in the nation, but its auto export totals were close to zero. Today, exports comprise approximately 20% of the Port’s total auto volumes. In 2014, nearly 50,000 Ford vehicles were exported through the Port, which represented a 400% increase from 2013.

Strong and growing demand for Ford vehicles in Korea, China and in other international markets was demonstrated by the recent announcement out of Dearborn, Michigan that the iconic Mustang would be shipped globally for the first time. Portland was featured prominently in the announcement as the export gateway for the first shipment.

Auto exports and imports at the Port support more than 500 local jobs that pay above average wages. On the import side, vehicles are accessorized for the North American market by local workers in Portland before being delivered to dealerships. They are also ‘homologated’ in Portland before export to meet the different standards required or desired in Korea and China.